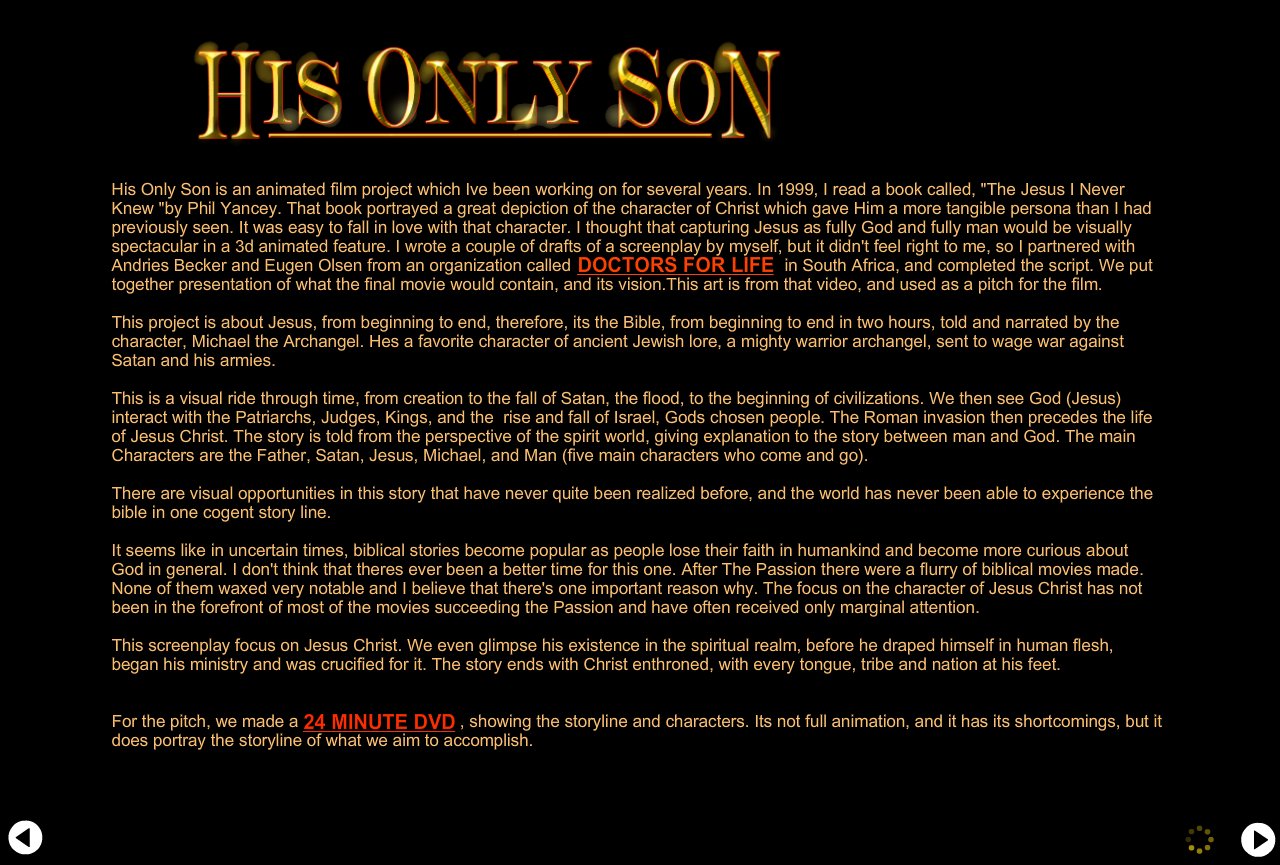 His Only Son, about

His Only Son is an animated film project which Ive been working on for several years. In 1999, I read a book called, "The Jesus I Never Knew "by Phil Yancey. That book portrayed a great depiction of the character of Christ which gave Him a more tangible persona than I had previously seen. It was easy to fall in love with that character. I thought that capturing Jesus as fully God and fully man would be visually spectacular in a 3d animated feature. I wrote a couple of drafts of a screenplay by myself, but it didn't feel right to me, so I partnered with Andries Becker and Eugen Olsen from an organization called in South Africa, and completed the script. We put together presentation of what the final movie would contain, and its vision.This art is from that video, and used as a pitch for the film.

This is a visual ride through time, from creation to the fall of Satan, the flood, to the beginning of civilizations. We then see God (Jesus) interact with the Patriarchs, Judges, Kings, and the rise and fall of Israel, Gods chosen people. The Roman invasion then precedes the life of Jesus Christ. The story is told from the perspective of the spirit world, giving explanation to the story between man and God. The main Characters are the Father, Satan, Jesus, Michael, and Man (five main characters who come and go).

There are visual opportunities in this story that have never quite been realized before, and the world has never been able to experience the bible in one cogent story line.

It seems like in uncertain times, biblical stories become popular as people lose their faith in humankind and become more curious about God in general. I don't think that theres ever been a better time for this one. After The Passion there were a flurry of biblical movies made. None of them waxed very notable and I believe that there's one important reason why. The focus on the character of Jesus Christ has not been in the forefront of most of the movies succeeding the Passion and have often received only marginal attention.

This screenplay focus on Jesus Christ. We even glimpse his existence in the spiritual realm, before he draped himself in human flesh, began his ministry and was crucified for it. The story ends with Christ enthroned, with every tongue, tribe and nation at his feet.


For the pitch, we made a , showing the storyline and characters. Its not full animation, and it has its shortcomings, but it does portray the storyline of what we aim to accomplish.